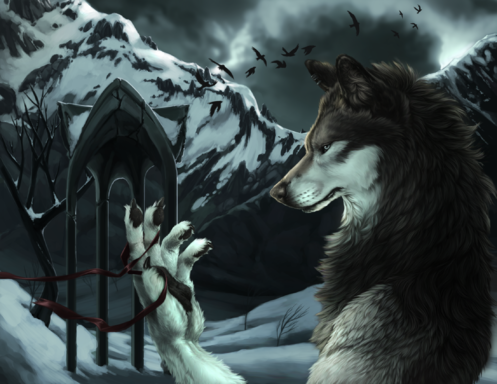 So over the weekend, I ended up buying Angels with Scaly Wings on Steam and holy hell I was not expecting to get so much out of a short visual novel type game. It's such an amazing little gem of a game that has surpassed my expectations multiple times in the few runs I have completed on it.

For those of you who don't know: Angels with Scaly Wings is a visual novel style game with some slice-of-life and dating sim aspects to it. The main premise of the game is that humanity has found a portal that leads to a modern day world similar to our own, though it is populated by sentient talking dragons of all shapes, colors, and breeds. You are chosen to be an Ambassador for Humanity and sent through the portal to establish a working trade relationship with the dragons. I mean, there is more to it than that, but I can't go into too much more details without spoiling some pretty interesting plot points for the story.

There are a possible 12 different endings to be obtained in the game (if I am not mistaken) There are about a dozen dragons you interact with the most, with 4-5 of them being the "main" ones. The rest are just side/background characters you interact with some. Each main dragon has both a "good" and a "bad" ending you can obtain. There is also a true "perfect" ending that can only be obtained by seeing all the good endings for the main dragons as well as an "evil" ending.

So far, I have got both the good and bad endings for 2 of the main dragons (so 4 endings in total right now) and holy hell, do they not hold any punches. I have found most of the endings I have gotten have left me with tears in my eyes from being that amazing with the writing. I will warn you know though if you haven't played it and intend to. The game does have a much more mature tone than some would think. A lot of the game focuses on more of a murder/mystery theme so it has a lot of blood and death in it. The game also states that it has "sexual content" but from what I have played, I haven't really seen any. I have only seen an "implication" that something intimate was going to happen before the screen fades to black.

Still, the game itself is rather cheap with the "deluxe" edition of the game only being like $14 dollars, the base game is only like $10, and for what it is worth, I would say the game is very much worth it. The story itself is rather deep with a complexity and twist to it that I was not expecting. I would highly recommend it to anyone who likes visual novel type games and wants to play through a rather interesting and amazingly told story.
You must log in or register to reply here.
Share: Link